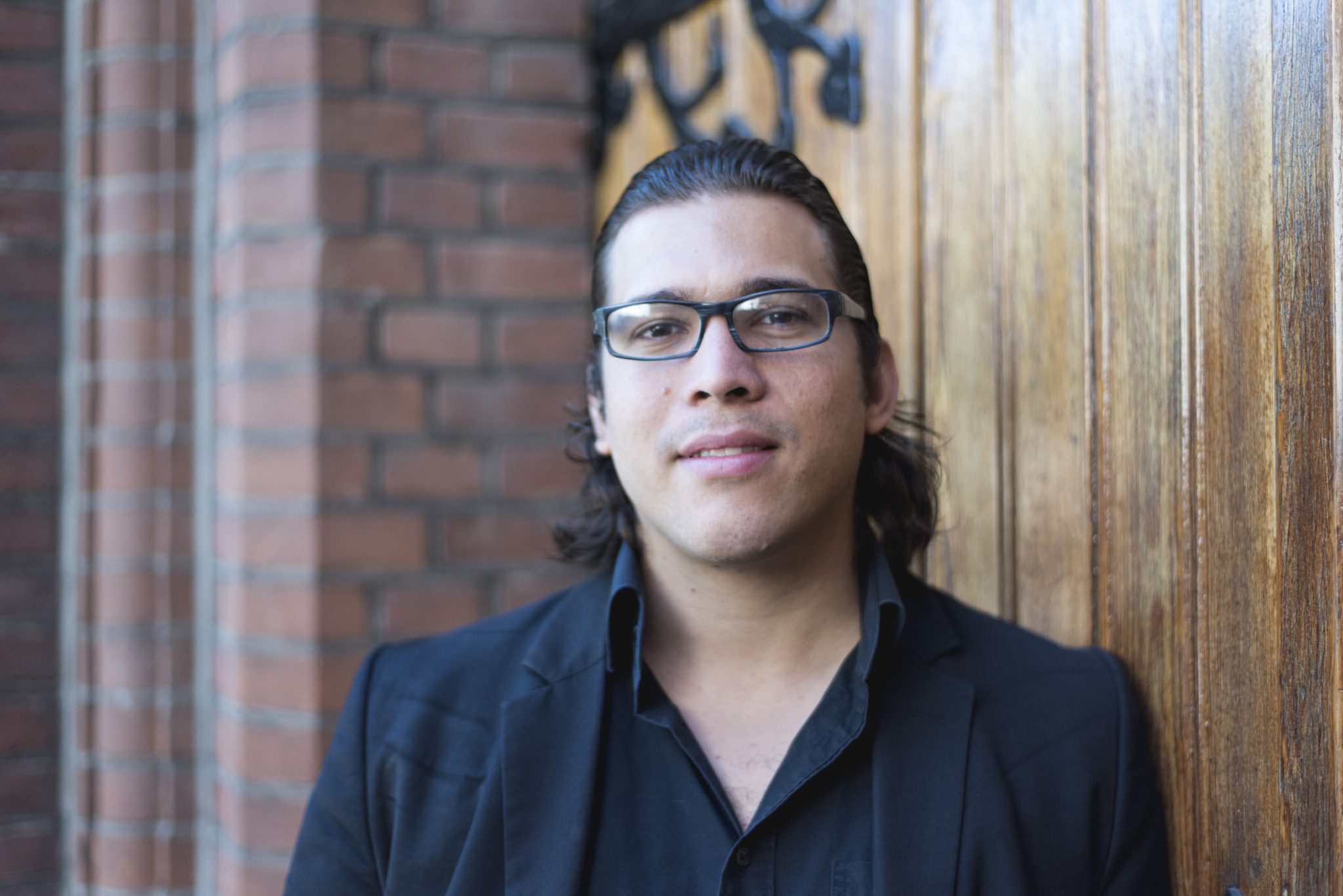 Xavier Geerman was born on the 2nd of August 1987 on an Island called Aruba. As a child, he was often encouraged to play small percussion-like maracas by his parents at family parties. It was a habit/tradition to switch instruments between songs. This was done because not everyone could play all the songs on the guitar, but everyone could play a percussion instrument so they would exchange instruments in between the songs. Xavier wanted to play the guitar too but he was not allowed to play it because he was too small to hold something so expensive and fragile, and he did not know how to play it yet. At the age of five, he finally learned 3 basic chords on the Venezuelan cuatro, and at the age of 6, he met Robin Giel who thought him how to play more chords. At the age of 7, his mother started teaching him a few chords on the classical guitar and at the age of 10, he started taking classical guitar lessons. 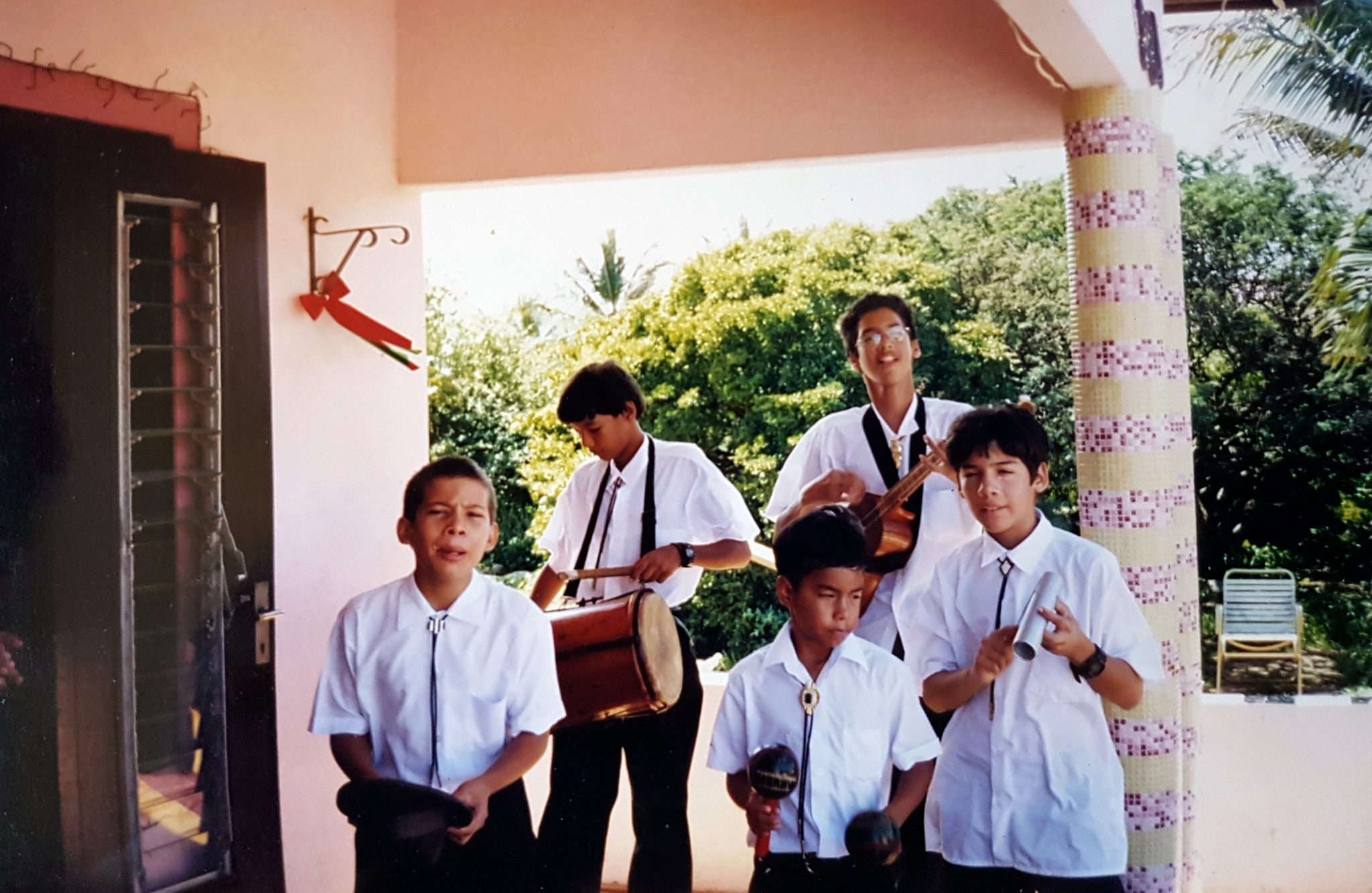 In 2006 at 18 years old he graduated from high school. A year later he went to the Netherlands to continue his music career. In 2008 he was accepted in the preparation year of Fonty’s conservatory but he later failed to enter the first year due to getting distracted from his studies by the recording sessions and live performances that he was doing with his band from Aruba.

Between the years 2008 and 2012, he spent most of his time studying and experimenting with different music genres. He also played with 2 different bands and accompanied different artists and was playing live shows every 2 weeks. He was also writing and co-writing songs and recording them with these artists.

On January 14th, 2012 he started taking his first lessons in orchestration for film and tv using the Berklee online certificate programs. By the end of September, he received a specialist certificate from this course. By then he was orchestrating his own compositions and arrangements. Some of these are available on youtube. He wrote a few concertos for string ensemble, one of which is still being performed by the “Jeugd strike ensemble” in Apeldoorn.

2013 was a year of study and progress. He expanded his online courses to a Master’s program (which includes 8 different courses) and he was also studying classical music in his free time. In October he started working with Tamara “Claymara” Tanger (a clay animation artist). He was composing background music for her clay animations. He has also been studying to become a piano technician since 2012. He graduated from this school in 2014 with one of the highest grades in the class of 2014.

In 2014 he was accepted at the Fonty’s conservatory in Tilburg and started his bachelor’s in classical music composition. He also finished his certificate program and received a master’s certificate in orchestration for film and tv. He also participated in the composition meets choreography event that takes place during the night of the arts festival at the Fonty’s academy of music and performing arts. 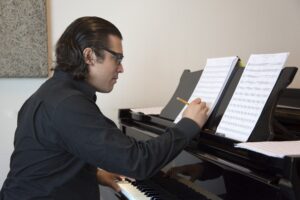 In 2015 he earned his propaedeutic diploma and he co-organized his first classical music event. Later that year he was invited to be a part of the composition meets choreography event again. He also composed a piece called “Tumbacali” for the “FC Jongebloed” ensemble. This piece has become a source of inspiration for him, because of the use of Aruban Rhythms in combination with European music composition techniques.

Early in 2016, he started researching the music history of Aruba. He wanted to use this knowledge in his upcoming compositions. During this year he visited Aruba 2 times to continue this research. Next to this research he started experimenting a lot more with the Aruban rhythms and mixing them with European classical music. In March of that same year, he participated in an “after-talk” (a discussion between student- and professional artists about the current and future direction of the opera) during the opera forward festival in Amsterdam.
He also composed a piece for the carillon of the “Heikese Kerk” (a church) in Tilburg. The composition was named “Philomena”. This piece had its premiere during the celebration of the 50 years anniversary of this carillon.
He also composed a piece for a soprano, guitar, and cello. This one was titled “Guardian angle’s plea and was inspired by the terrorist attacks in Paris.
Next to this he also composed a piece for Soprano, Alto, and harpsichord. It was a modern Kyrie Eleison.

In September 2016 he was asked by Andreas van Zoelen to compose a piece for his saxophone ensemble. He was also instructed that it would go in premiere at the Royal Concertgebouw of Amsterdam. Next to this he also participated again in the Composition meets choreography event. This year he composed a piece that was called “False awakening”. This was a 10-minute piece that was composed together with another composer called Loes Reiling. They each composed half of the piece.

On the 11th of January of 2017 his new composition titled “Ashes to Ashes” made its premiere at the Royal Concertgebouw of Amsterdam. 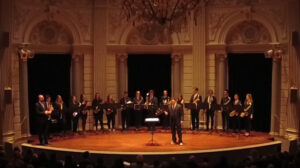 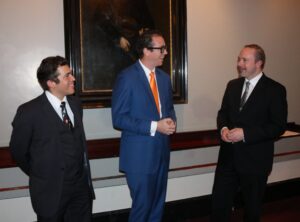 In February 2017 he participated again in an after talk during the Opera forward festival of Amsterdam. From March till May he worked closely with choreographer Sarah Perscimone on a composition for her Bachelor’s final exam. This piece was called “Ospiti” and it went into the premiere on the 31st of May 2017. It was well received and it had a few follow-up performances during the summer vacation up until the end of October.

Next to these two projects, Xavier was also asked to compose a piece for the saxophonist Kinga Szilágyi. It was for her final exam of her Master of Music degree and it was performed in the Concert hall of Tilburg on the 26th of June in 2017.
He also composed 2 other pieces on the side, one for a flute quartet and another for two singers and an organ. But these last two haven’t been performed yet.

In the summer vacation, he traveled to Aruba and he attended the “Aruba symphony festival”. There he met oboe-ist Courtney Miller from Iowa and he is currently writing a piece for her. He also met Flutist and director of the national flute orchestra of Venezuela Maria Gabriela Rodriguez. He later sent her a piece for flute quartet and is waiting to hear about the performance.

Just before he left for the vacation he was asked to write a piece in the style of “De Stijl” for the Anthony Kok festival in Tilburg, and this piece was performed in the “New Vorst” on October 7, 2017. After that, he also composed a piece for the event called Fiomarathon. It was an event that took place during the November Music festival in s’Hertogenbosch. The piece was performed by “FC. Jongebloed” in the “Willem twee concert hall in s’Hertogenbosch on the 9th of November 2017, and in the Canal in Tilburg on the 21st of November 2017.

In late September of 2017, he met choreographer Hanna-Lina Hutzfeldt during an interdisciplinary speed date. They started working closely together on a performance that was called “Het is waar”. This performance premiered on the 22nd of December of 2017 during the night of the arts festival at the Fonty’s academy of music and performing arts.

In January of 2018, he composed a piece for solo guitar that was called mother’s home. It was the first composition of a series in a project called “Project Ruins”. It is a project that focuses on the ruins of Aruba and the idea is to compose music that matches these old buildings and their history through the eyes of modern society. Mother’s home was mixed with an abstract dance that was performed by choreographer/dancer Sarah Prescimone and it went into the premiere on the 11th of March 2018.

In April 2017 Xavier was asked by the artistic director Anthony Heidweiller to be a part of the Opera Forward Festival in Amsterdam. He was asked to compose a mini-opera for this festival. He then worked for almost a year within a creative team to realize this opera. This opera project was different from the other ones of the festival because it was allowed to be longer (20 minutes instead of 10 minutes) and it was an opera for the youth. We were also the only group that started working with a director at the beginning of the writing process. Xavier composed a 20-minute mini-opera alongside his composer colleague Loes Reiling under the direction of Elena van Leuven.
This opera went into the premiere on the 17th of March 2018. On the last performance, they were visited by Director Pierre Audi who was interested in this project. His reaction was that it was the most progressive opera that he had yet seen during the whole Festival, combining innovative direction with modern music and scenery while still using the traditional opera voice sound. He expects great things from us in the future.

In 2018 Xavier was nominated for the “Jacques de Leeuw” prize. It is a €10.000 prize that is given to the most outstanding artist of the Fonty’s academy of arts. Each art department nominates what they consider the best candidate from their department and these nominees then compete for the prize. Xavier did not win the main prize, but he did win an “atelier” prize, which means he gets to work in a studio for free for a whole year.

In May 2018 Xavier met the Greek choreographer Vicky Angelidou and she thought him a few dance improvisation techniques such as “lead and follow”, which they developed together applying it to music improvisation as well. In October of that year, they started a project together titled “Hear me to see you” which was a performance for experiencing the world of the deaf and the visually impaired. The musician (Xavier) would perform with earplugs on, while the dancer (Vicky) would perform wearing blindfolds. Later they’ve split the project into two where Vicky will continue with the Blind department and Xavier with the Deaf department. This project is still active.

In September Xavier and Hanna-Lina reunited and they created an improvised performance that resembles a shamanic ritual using a loop pedal and percussions, and they performed it at “De schatkamer”, an event organized by the “Ateliers Tilburg”. Hanna later developed the performance, researching the world of trans-disciplinary. They renamed the performance “Soxir” and Hanna invited two dancers (Rosalie van Wamel and Saskia Neuen) to take her place and they premiered the piece at Fontys’ night of the arts 2018.

On the first of January 2019, Xavier did a residency in Kiel, Germany.