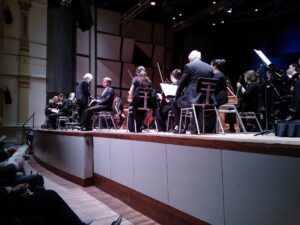 Let me start by saying that this was my first time attending a Matthew’s passion performance.

I am a fan of Baroque music, so attending a Matthew’s passion is a must, since it is considered by many as the peak of the Baroque era.

For those of you who don’t know, the Matthew’s passion is one of two passions that had been composed by Johann Sebastian Bach (1685 – 1750) and had survived the ages. In Alfred Kerckhoffs’ Book about Rhetorica Alfred mentions that Bach had composed four passions in total, each one derived from each of the four evangelists (Matthew, John, Mark and Luke), but that only the two mentioned above had survived the wars and other disasters.

The Mathew’s passion had its premiere in 1727; it’s a very old composition. To give you an idea of how old it is, it is so old that we had forgotten how to play it and what it’s supposed to sound like. It was just recently (in the last half of the twentieth century) that we had researched the old ways of performing. Scholars and performers have dedicated their lives to understand the way Bach thought about every note that he wrote.

This is why some people were interested in Reinbert de Leeuw’s interpretation.

Reinbert de Leeuw (1938) is a well-known composer, pianist and conductor from the Netherlands. He is known for his involvement in the “Notenkrakersbeweging” (a 1960s movement of artists protesting the conservative music hierarchy of those days), and for rediscovering the music of Erik Satie and conducting many modern compositions. In one of his interviews he explained that his approach to the Matthew’s passion will be different (Berntsen, 2016). He asked the instrumentalists to learn the lyrics by heart and to perform their parts like a singer, for instance to sing in their mind while playing their parts. And this (I suppose) was the biggest audible difference in his version of the Matthew’s passion in relation to other interpretations.

So there he stood, giving the count off to start the piece. The first things I noticed were the old instruments being used, I was curious to hear what they sound like. Then I realized that there were two organs on the stage. That’s because I suddenly realized that it was a double orchestra and double choir.

The first notes that I heard sounded so pure and clean. It wasn’t as exciting as the concert I attended in Leuven (see Les Muffati,  d.d. 04-08-2015), were every note sounded expressively and overwhelming. De Leeuw’s interpretation on the other hand was sober and calm, slowly moving towards a dissonant and then returning to consonance. It was really taking it’s time, pacing itself, like Jesus with his heavy cross. The violins sounded (in my opinion) very lyrical and clean. In another baroque concert I have heard them sounding more “screeching” (in the lack of a better term). Maybe it was the combination of organ and flute that caused this particular sound, but I’m convinced that is was Reinbert’s influence that made it sound like this.

I have never been a big fan of vocal parts, especially if I can’t quite understand the text. This caused me to lose a bit of focus during the first narratives. But on the other hand, I really like choir parts, because it always sounds more massive, and filled with lots of harmonic colors. And then comes Bach, along with his amazing counterpoint techniques which bests resembles a crowd of people talking to each other at the same time. It is amazing to notice the understandability of the text despite the chaos. Then suddenly they start singing a chorus which somehow sounds so familiar to me, the “Erkenne mich mein Hüter”(recognize me my keeper) chorus, and at that moment I foresaw this chorus being repeated during the climax moments (which indeed actually happened). I don’t mean that it was predictable, it was a kind of “Déja vu” sensation. I don’t remember if it was about a reference in a music history class a year ago, but I suppose that we used this same (or a similar)chorus in my hometown Santa Cruz (Aruba) when we did the passion in church. And the more I hear this theme being sung, the more I long for that climax moment. This led to a very emotional moment for me when they sung “Wenn ich einmal soll scheiden…” (when once I must depart). Especially since Reinbert decided to perform this moment à capella. That made it sound so mourn- and sorrowful. I’m not sure if it was written to be sung à capella on that moment, but it sure got the job done.

In conclusion I found it a very emotional experience. I can’t say much about Reinbert’s interpretation, but I think it was well executed.  And I feel inclined to attend another Matthew’s passion in future, if not only for comparison.